Outperforming The Competition With An Underdog Attitude 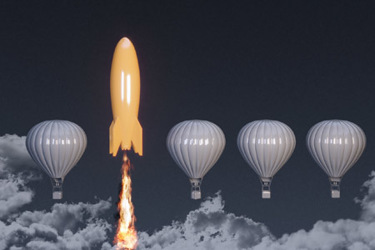 We love underdogs. Remember when the US hockey team earned a gold medal with an astonishing defeat of the Soviet Union in the 1980 Olympics? Perhaps that’s too long ago for many of you to remember firsthand. Here’s one that may be more familiar to you, the perennial underdogs, AFC Richmond, coached by our favorite uber-optimist Ted Lasso.

Stories of not-so-talented teams bettering their richly resourced competitors are the ingredients for great emotional drama. They are recreated in cinema, and we often see them played out for real in sports. But the story of the underdog can deliver much more value beyond entertainment.

We frequently view underdog stories as rare occurrences heavily influenced by good luck, but in his book, The Walk-On Method to Career and Business Success, Jim Roddy disagrees. He features 31 underdog cases and how they launched successful business careers from having to work harder for every achievement earlier in their lives.1

The Value of Doing Without

I am the son of a generation who lived through the Great Depression. My 90-year-old mother still washes and reuses plastic baggies and aluminum foil. As a youngster I so often heard their stories about how they “did without” that I could recite them verbatim. But the Greatest Generation2 wore their depression-era experiences like a badge of honor. I can still hear them telling me that if I would learn to live with less, I might grow to be a successful adult.

When was the last time you heard a business leader state that their key to success was not having enough resources? I don’t ever recall speaking with a marketing or sales leader who told me they had enough money and people to do their jobs well. But what if I told you the ones who had less, were better at what they did. Some of the best marketing and sales leaders I know, speak of the days when they had nothing to work with as the most valuable in teaching them how to be successful.

I’m not suggesting you strip away your marketing budget and reduce your headcount. But perhaps we could adopt the same attitude as the 1980 US hockey team, AFC Richmond, the Greatest Generation, and Jim Roddy’s walk-ons.

The US hockey team knew they were inexperienced and lacking the talent that the other national teams would be bringing to the 1980 Olympics. So, they focused on things they could develop in training to make them more competitive: speed, conditioning, endurance, and teamwork. Marketing and sales teams can do the same. When was the last time you conducted professional development with your team on value-delivering customer engagement, writing better emails, or asking better questions to understand the issues your customers face?

Ted Lasso has spawned a bit of a cult following. Recently I even read something about Lasso’s leadership principles. Having binge watched both seasons of the acclaimed series, I consider myself an expert, even if no one else does. Coach Lasso is never concerned about wins or losses, but instead focuses on how the team is improving. For marketing and sales teams, that may mean doing some collective self-examination when sales goals are missed or a campaign under-delivers. The key is to always define what could be done better or differently going forward.

The Greatest Generation accomplished what they needed to with what they had. There were no lavish meals, they ate for sustainment. No fancy lattes, they reused coffee grounds and boiled them longer on the second and third cycle. For marketing teams, maybe that professionally filmed facility tour with music and a sweet voice-over isn’t necessary. I recently viewed a facility tour that was done live using a mobile phone and narrated by an engaging, knowledgeable employee. It was authentic and memorable!

In his book, Roddy identifies the five characteristics of underdogs. He goes further to refer to them as the steps we can all take to adopting the walk-on method and achieving great success in business, career, and life. Walk-on refers to college athletes who are not recruited onto sports teams, but try-out. I won’t describe each of the five steps, but my favorite is “running uphill.” We are trained at a young age to take the path of least resistance, but we are cheating ourselves when we do. We learn far more by intentionally choosing the harder path. There are so many applications for this principle in B2B marketing and sales. How many times have we recycled the same messaging simply because it was easier than crafting some new and fresh content that would actually attract buyers?

As stated earlier, I am not advocating for reduced budgets and smaller staffs. What I am encouraging is being more intentional in adopting the spirit and character of the underdog.

This approach is not for all of us, but consistently applying it to yourself and your team will deliver great success.